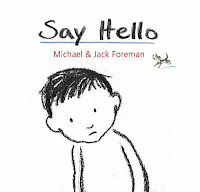 Say Hello by Jack and Michael Foreman is the beginning of our inquiry into friendship.  Relationships can begin with a simple hello. It is a fitting book for our children as many are new to Creative Minds and finding someone to play with may be overwhelming. Through the story, the children are able to see how two characters (a boy and a dog) feel when they are not asked to play and how a greeting can initiate play.

Popular posts from this blog

May 26, 2017
Verdi, a young python, does not want to change.  The last thing he wants his to turn from his beautiful yellow to boring green. Verdi tries to change his colour back to yellow by scrubbing his skin and then covering it with mud. Nothing works.  He notices that the sky is bright yellow just like he used to be. Verdi launches himself from the treetops certain that his flight will change him back to yellow.

How did Verdi fly through the air? What a great opportunity to learn about catapults. Elastics and popsicle sticks were the only materials need to build a catapult.  First the children, used plastic snakes to sail through the area.  It was delightful to hear the excitement and the laughter as the children made  their "Verdi" fly.